I, along with many of my fellow St. Pete Bike Club members, had the pleasure of listening to a presentation by Mr. Lucas Cruse, with the City’s Transportation and Parking Management Department, who specializes in bicycle and pedestrian routes in St. Petersburg. Lucas is an engaging speaker who fielded all questions asked, even some not within his area of responsibility, with humor and intelligence. 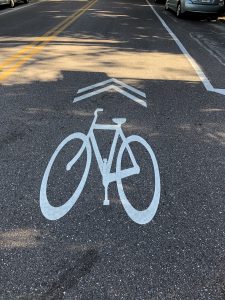 Sharrows, the painted image of a bicycle with double arrows above the bike in the direction of travel, were a hot topic, especially with the coming changes to our east-west main traffic routes: First Avenues North and South, and Central Avenue.

The concept of bicycle safety and shared lane markings will require extensive education of everyone using the roads, including the increasing use of informational signs with a bicycle image and the words “may use full lane.” You can see such signs on Central Avenue as well.

I encourage all area cyclists to make it their mission to be informed about bicycle safety, to meet Lucas Cruse when possible, and to be willing to voice your opinion about changes and suggestions that may allow all of us to be on our roads in a safer environment.

You can find more information on bicycle safety by going to www.stpete.org/transportation. There are periodic postings of cycling info including the progress of local bike trails, changes in traffic patterns, and other useful information for us cyclists.

Be safe out there.